Electricity is the pinnacle of human civilization. At present, the growing concerns over significant climate
change have intensified the importance of use of renewable energy technologies for electricity generation. The
interest is primarily due to better energy security, smaller environmental impact and providing a sustainable
alternative compared to the conventional energy sources. Solar, wind, biomass, tide, and wave are some of the
most reliable sources of renewable energy. Ocean approximately holds 2×103 TW of energy and has the largest
renewable energy resource on the planet. Ocean energy has many forms namely, encompassing tides, ocean
circulation, surface waves, salinity and thermal gradients etc. Ocean tide in particular, associates both potential
and kinetic energy. The study is focused on the latter concept that deals with tidal current energy conversion
technologies. Tidal streams or marine currents generate kinetic energy that can be extracted by marine current
energy devices and converted into transmittable energy form. The principle of technology development is
very comparable to that of wind turbines. Conversion of marine tidal resources into substantial electrical
power offers immense opportunities to countries endowed with such resources and this work is aimed at
addressing similar prospects of Bangladesh. The study analyses the extracted current velocities from numerical
model works at several locations in the Bay of Bengal. Based on current magnitudes, directions and available
technologies the most fitted locations were adopted and possible annual generation capacity was estimated.
The paper also examines the future prospects of tidal current energy along the Bay of Bengal and establishes a
constructive approach that could be adopted in future project developments. 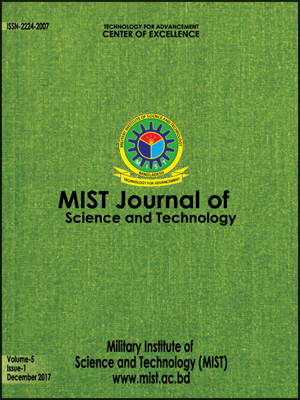